Born Frances Matilda Van de Grift on March 10, 1840 in Indianapolis, Indiana, Fanny was the oldest of six children. Her parents, Jacob and Esther, were both from Philadelphia and were of Swedish and Dutch ancestry. Jacob was a carpenter and later owned a lumber mill in Indiana.

An educated woman, Fanny was married at 17 to Samuel Osbourne, an officer in the Union Army. They had a daughter, Isobel “Belle”, a year later. Their lives changed when Samuel went  to serve in the Civil War. Afterwards, Sam left for the silver mines of Nevada to find his fortune and later sent for his wife and daughter. 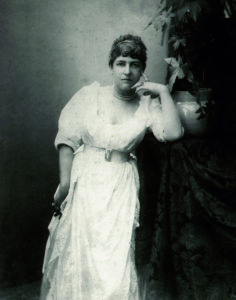 In 1864 Fanny and five-year-old Bell, travelled by ship from New York to Panama, crossed the isthmus, and then continued up the coast to San Francisco before travelling inland to Nevada. The young family then spent several difficult years in mining camps until resettling in Oakland, California.

By 1875, however, the marriage had deteriorated and Fanny was unhappy. Despite giving birth to sons, Lloyd (1868) and Hervey (1871), Fanny and Samuel had drifted apart and Fanny left her husband to travel in Europe taking her children with her.

Attempting to study art with Belle in Antwerp, the small group learned women were not permitted into the school and so they returned to Paris where they enrolled at the Académie Julian. Soon after arriving, Hervey, her youngest, contracted Tuberculosis and died in April 1876.

Distraught, Fanny moved with her children to the French countryside and the small artist-populated town of Grez-sur-Loing near Barbizon. There she met artist, Robert Alan Mowbray Stevenson. That summer, his cousin, Robert Louis Stevenson, was visiting. Fresh from university, Louis was seeking inspiration for his writing and instead found true love. Conflicted for a growing love for another man, Fanny and her children returned to California in 1878.

A year later, Fanny was convinced there was no salvaging her marriage and wrote to Stevenson. At the end of August 1879 Stevenson arrived on her doorstep in Monterey – looking emaciated. Unwell and with little money to his name, Fanny still chose Stevenson and divorced her husband in December of 1879.

On May 19, 1880, Louis and Fanny married in San Francisco.  The two stayed together for the rest of Stevenson’s life – much of which was spent trying to keep him healthy and seeking warm climates in which to live.

After Louis died in 1894 in Samoa, Fanny suffered from depression and poor health. She eventually sold their home and returned to California. She subsequently built homes in San Francisco, Gilroy, and Santa Barbara and spent the rest of her life devoted to her husband’s legacy.

Fanny passed peacefully in her home, Stonehedge, on February 8, 1914 in Montecito (Santa Barbara). Her daughter, Belle, had her cremated and interred her remains alongside Stevenson in Samoa.

Fanny’s sister, Nellie Sanchez, summarized these in her biography of Fanny as “Several fairy stories published in Our Young Folks and St. Nicholas magazines for young people…[and a] number of short stories in Scribner’s and McClure’s magazines, among which “Anne” and “The Half-White” attracted the most attention.

Untitled (Portrait of a Cat) 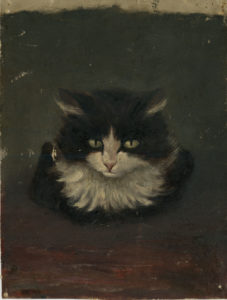 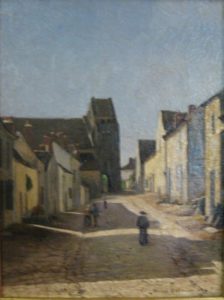 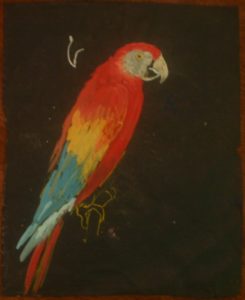