The first child of Fanny and Samuel, Isobel “Belle” Stewart Osbourne, was born in Indianapolis, Indiana on September 18, 1858.

At the age of five she accompanied her mother to the Nevada silver mines to live with her prospector father. By the time she settled in the San Francisco Bay Area, Belle was nearly ten. She attended Lincoln Grammar School in San Francisco – where she was terribly unhappy, Dr. Lunt’s Dance Academy – where her artistic side flourished, Oakland Grammar School – where she made friends, and then Oakland High School. Yet she was never a top student.

In Oakland, it was a teacher who brought Belle’s artistic talents to her parent’s attention. She was soon taken out of high school and began attending the School of Design in San Francisco. Shortly thereafter, her mother began attending classes there as well (taught by Virgil Williams).

Preparing Belle for a suitable marriage and potentially a future as an artist, soon became a ready excuse for Fanny to leave Samuel under the pretext of a trip to study art in Europe. In Paris, Belle began attending classes at the Académie Julian.  After her youngest brother’s death, the family moved to Grez-sur-Loing where Belle fell in love with a young Irish artist, Frank O’Meara, however he was not ready to settle down.

In 1878, the family returned to Oakland. Soon after they left Samuel again and moved to Monterey. There, Belle fell in love with another young artist, Joseph Dwight Strong, the son of missionary parents and who had been raised in Hawaii. Despite her daughter’s infatuation, Fanny was against the match believing it would ultimately make her daughter unhappy.

Not heeding her mother’s advice, Belle secretly received permission to marry Joe from her father in the fall of 1879. One year later their son, Joseph Austin Strong, was born.

Life in the South Seas

The young family moved from San Francisco to Hawaii in 1882. In Hawaii, Belle became an intimate of both white-missionary society and the native Royal Family. Joe received commissions to support the family while Belle raised Austin and taught drawing and dance. In 1889 she was awarded the appointment to the Royal Order of Oceania by King Kalakaua.

That same year, the CASO arrived in Honolulu bearing her mother, brother, stepfather, and step-grandmother. After some reconciliation (Fanny and Belle had a strained relationship) the family dispersed for more adventures.

After the departure of Margaret Stevenson for Scotland, Louis, Fanny, Lloyd, and Joe set out to explore more of the south sea islands while Fanny and Austin were left in Australia.

Despite an attempt to return to Europe, health issues forced Fanny and Louis to return to Samoa where they had purchased a plantation. When the main house was finished, the Strong family joined them on the property taking up residence in the “Pineapple Cottage” and stayed until Fanny sold the property after Louis’ death.

The Life She Loved

While not extensively documented, Fanny’s life after Stevenson’s death was fulfilling and she did develop a strong presence in the literary community.

Her mother having been proved right, Fanny and Joe’s marriage had become strained and the two divorced. She later married her mother’s secretary, Edward “Ned” Salisbury-Field. An artist and writer himself, the two were together until his death in 1936.

Belle spent the remainder of her life memorializing her life and her mother’s life with Stevenson. Traveling extensively she eventually established an artist/writers colony near Los Olivos.

Belle outlived everyone in the family, passing in 1953 (a year after her only son, Austin). She had no grandchildren and left much of her estate to her nurse Margaret “Angel” Bailey from whom a large part of the RLSM’s permanent collection was acquired.

A talented artist from a a  very young age, the RLSM is privileged to house and care for a variety of illustrations, sketches, and paintings by Belle. Below is a selection of her work to demonstrate her talent.

No title, sketch of Louis Reading to Fanny at Vailima 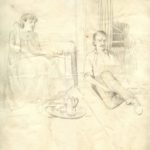 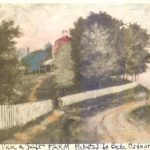 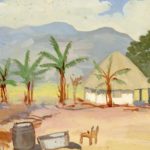 Fortune telling card No. 31/46, White Castle on a tall Hill 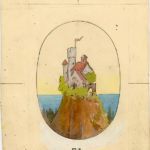 Self Portrait, Oil on canvas